Polaroid’s Polaroid camera has a new member, Polaroid Now+, which you can think of as an upgrade from last year’s Polaroid Now. The two major selling points of the new product, one is the addition of Bluetooth support, and the other is that 5 experimental lens filters will be included with the box. It includes options for starlight, red vignetting, yellow, orange and blue, which officials say will help users “reimagine the possibilities of instant film photography.” 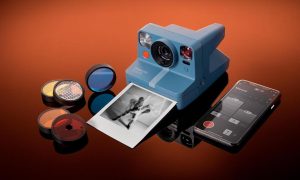 In addition, Polaroid has also integrated a light sensor into the lens part to enhance the performance of the filter. In terms of appearance, in addition to the common white background and rainbow stripes, the manufacturer also introduced a blue-gray color scheme with “seasonal characteristics”. It is worth mentioning that, along with the release of the new camera, Polaroid has also added two new functions, aperture priority and tripod mode, to the app. The latter, combined with the tripod interface on Polaroid Now+, should be able to come up with some new ways to play.

Polaroid Now+ will be available on Polaroid’s official website from August 31st at a price of 1,199 yuan.